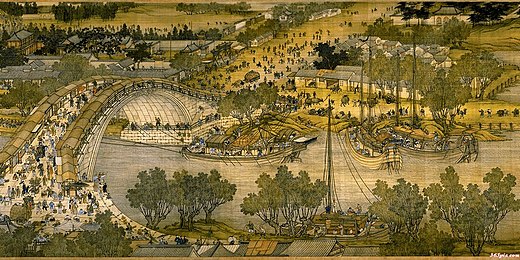 ( Speaking with Neo’s from ‘The Matrix’ voice:) I know Chinese history.

Nevertheless, at http://www.edx.org (I am giving a link to the first part of the course, out of 10. The interface there is a bit lousy, but I believe in you: https://courses.edx.org/courses/course-v1:HarvardX+SW12.1x+2016/course/) there is an excellent course on Chinese history for those who only have a very remote image of China or history in their minds, giving more or less everything you need to know about different Chinese epochs to be able to read Chinese literature and understand what’s going on, to recognise common plots, to spot anachronisms and like. Of useful, but slightly queer skills, it gives you a unique opportunity to support a blue Chinese person who may happen to be near you in his time of missing home.

In general, right in the first chapter of the course one of the lecturers, William Kirby, pronounces a characteristic phrase that “when I started learning Chinese culture, almost everything I had thought I had known about China turned out to have been wrong”. And that’s almost exactly describes my feelings too. And getting rid of this disgusting feeing may be another reason why you may want to take this course.

The other two things this course is speaking about and which are hard to conceive by other means, perhaps, and which may be actually more important than the titular topic of the course, the Chinese history:

Firstly, this course teaches the ‘humanities method’. Despite the fact that I still consider hard sciences much more important than soft sciences (and this is where I disagree with Prof. Kirby), still a universal development of a human and for brain understanding the humanitarian method is very significant. Significant because, firstly, for to implement any hard projects, at least so far we still need to work in teams, and understanding how human thinking functions, how this functioning works “by default”, and how it changes with education and specialist training is very important, at least to be able to predict how your colleague or a subordinate performs without having an explicit instruction, or having an incomplete one (which is the case in almost 100% of the cases, since no instruction may cover all possible cases). Secondly, now I even more believe that hard and soft sciences utilise different parts of the brain, which actually need to be developed separately. In hard sciences most of the brain resources are spent on actually understanding the essence, the meaning of a statement. In other words, everything is just too difficult, and after all participants in a discussion have spend enormous effort on grasping what’s actually going on, establishing consensus and inferring the consequences doesn’t require much energy (even though as far as I understand, string theory and quantum mechanics ‘interpretations’ are much closer to the humanitarian-style discussion in this aspect). On the other hand, in soft sciences the very understanding of a statement doesn’t require as much effort, but on the other hand, interpreting this statement requires a lot of work, establishing a common (in a group) understanding of a statement requires a lot of work, predicting how other people will interpret this statement is not easy, and generating implications of the statement requires a lot of creativity. Thus, understanding a statement is easy, but establishing consensus is hard. And this feeling “ow, I haven’t even thought about it” is very much worth the trouble of learning.

Secondly, peculiarly, the course itself may serve as a nice introduction to state building. It’s quite interesting, because exactly the same questions discussed in the Chinese history course could have been discussed the course of studying European or Russian history, but for some reason I haven’t meet them before, either at school or at the Uni. Here, on the other hand, many point where the government/state may be present in the world are exposed. What are the areas where the state is present, where the society is present, where there are both and where there is none, and only the individual is present. Which questions arise during the interaction of various human organisation structures between each other, which human requirements/necessities/desires the state may or can provide. It is very interesting that these questions are discussed without a defined ideological attitude of the state being good or bad by definition. The Chinese state has been very different in different times from totally anarchist to completely totalitarian, while still preserving the same ‘Chinese’ cultural lineage, and in this sense was a unique testbench of different human interaction models.

To sum up, I highly commend. Despite the course seeming a little bit too easy for me (I know, in the Russian HEI, as in most Asian in general, the students are pushed beyond any reasonable sanity level, so it probably would have looked like this to many my compatriots and history nerds all over the planet) it took me slightly less then three years (with breaks). But the presentation is very good, understandable, clear and succinct. And perhaps the relative ease it precisely to give more liberty in personal extracurricular exploration, so that the studen’t wouldn’t have less of a desire to say ” Over. This sisyphian labour is done, and I’m not touching this any more.” but would rather want to go further and explore more of the wonderful world of Chinese culture on his own.

As I have already said, highly recommend. The next round of the guided (with human instructors) run of the course has not been announced so far, but even in the automatic mode it’s still very much worth it.